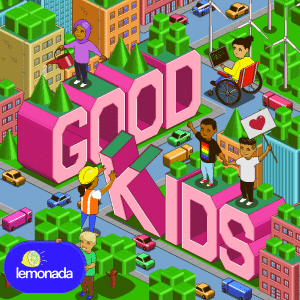 Podcast host Jody Avirgan’s daughter has learned a lot from the hit kids’ TV show Daniel Tiger: how to say thank you, how to deal with anger, and even how to use the potty. The show’s songs have been so effective for her that Jody’s started implementing them into his parenting strategy. “I found myself doing what I’ve come to call the Gaslight Daniel Tiger technique, which is trying to convince my daughter that there are Daniel Tiger songs about very specific things that I want her to do or situations that we’ve encountered.” The catch is, that means Jody has to come up with his own Daniel Tiger-style songs on the spot. Hear Jody sing about putting away the vacuum cord, taking off your muddy shoes, and more!

Support the show by checking out our sponsors!

Interested in learning more about Jody? Check out the links below:

To follow along with a transcript and/or take notes for friends and family, go to https://lemonadamedia.com/show/good-kids/ shortly after the air date.

Stay up to date with Good Kids and everything from Lemonada on Twitter, Facebook, and Instagram @LemonadaMedia. For additional resources, information, and a transcript of the episode, visit lemonadamedia.com.

If you want to submit a show idea, email us at goodkids@lemonadamedia.com.

Hello, my name is Jody Avirgan, and you are listening to GOOD KIDS. I am a podcast host and producer. And today I’m gonna talk about my latest successful parenting techniques, something I call—Gaslight Daniel Tiger.

It is, I guess, in the greater Mr. Rogers cinematic universe. And it, I think, picks up a lot of the things that Mr. Rogers does in terms of sort of helping kids, I guess, have a little bit of a moral compass, and really think about kind of their behavior. And the other thing about Daniel Tiger, in addition to be in a sweet, kind of engaging show, is that it is full of all these songs that are incredibly effective. And all the songs are mostly about, you know, moral decisions, they have a moral lesson. But they’re catchy, they’re simple. And they really, they really, really work. So here’s how I know the show is really good. I’m working with my daughter, I mean, first, like, watch her watching it, and I can tell she’s incredibly engaged. And she’ll start singing some of the songs back to the show or singing along as the show is, is going on.

And so you know, their songs like what you do when you’re angry. And so the song I think, is when you feel so mad that you want to roar, take a deep breath, and count to 4, 1-2-3-4. That’s like a wonderful little song. And it’s like, yeah, that’s a very, you know, that’s a thing I’d kind of intuited with her anyways, like, if you’re feeling upset, take a breath, pause. So I noticed her singing these songs back as she was watching. But then we started to notice that she would sing the songs, not when watching that they had to sort of jumped the world of Daniel Tiger’s Neighborhood and entered our world, the real world.

And so for instance, when we would do something nice for her, you know, I want a cup of water, we would get her a cup of water, she wouldn’t say thank you, she would go thank you for everything you do, which is a Daniel Tiger song, you know, and that’s actually like, quite grandiose. It’s like, I just got your cup of water, but you’re thanking me for everything I do. That’s quite nice. But you know, it’s showing that like, it was really like seeping in. And like, to be honest, I kind of started to realize that like, oh, this show is really setting my kids moral compass for me. And a lot of like, the way she’s processing these things are coming through the songs on this show. You know, I would say the most effective Daniel Tiger song and it’s just, it’s a miracle is the one about going to the potty.

So it goes. If you have to go potty, stop and go right away, flush and wash and you’re on your way. Potty training is pretty hard. But we lucked out that we were potty training literally during the full-on lockdown. So we were just stuck inside. And there’s nothing else to do but be within 10 feet of the toilet. But you know that song is just amazing because of that simple message of like, if you have to go potty, go right away. And now she’s fully trained on just like, I have to go potty and sick immediately running into the bathroom. So that one is that one is huge. I’ll take that, like the moral compass stuff is nice. But the body training stuff is what you’re really in it for.

So once I had this realization that a lot of the decision making and kind of moral compass in my child was being refracted through Daniel Tiger, I decided that it was time to kind of embrace it and, you know, really outsource or really licensed the moral authority to Daniel Tiger, whole cloth. And so I found myself doing what I’ve come to call the Gaslight Daniel Tiger technique, which is trying to convince my daughter that there are Daniel Tiger songs about very specific things that I want her to do, or that are situations that we’ve encountered. So there’s Daniel Tiger songs that do exist. And then there’s these moments where I am sort of at a loss and trying to negotiate with her.

And I have found myself saying, well, it’s just like that Daniel Tiger song about this thing that we happen to be doing. And that has been very effective. The catch, of course, is that I have to back that up with an actual Daniel Tiger song that addresses the very specific situation that I’m trying to, to navigate. We have a vacuum that has a long cord, and it doesn’t have one of those. Pull it in, it sucks the cord back in things, which is the bane of my existence, the cord is just always everywhere. And our daughter likes to play with the cord a little bit. And so I found myself saying, well, let’s clean up the vacuum cord. And this is just like that Daniel Tiger song about cleaning up a vacuum cord.

And then I’m like, take the vacuum cord, wrap it around the hook, get it done. By the time I look, you know, and so far, so good. She’s like, you know, she’s not saying, oh, yeah, that’s right, it’s Daniel Tiger song, but just putting it in that Daniel Tiger framing seems to so far be pretty effective. So yeah, if issues are covered in mud, take them off before you come inside, they don’t always have to rhyme. Sometimes you have to make them up, you kind of have to make them up on the fly. And so it’s hard to sometimes find the rhyme or the meter. But you know, if you can kind of approximate a Daniel Tiger song, it so far has been pretty effective.

At some point she’s gonna catch on, right? And so I’ve been trying to figure out what, what I’ll do at that point, I don’t think she’ll feel betrayed. And I don’t know, she’s gonna go, you know, but at some point, I might sing a song and she’ll go, that’s not a Daniel Tiger song, or even worse, like, point to the iPad and say, show me Daniel Tiger singing that song. And in which case, I really have to get creative. But that is also again, a big experience of my own parenting is you just do stuff that works until it doesn’t work. And then you move on. And you know, sometimes stuff works for an hour, sometimes stuff works for a few weeks, or a month or a year. But often it’s temporary, and then you just move on to the next thing.

The relationship with screens in our house, I think is probably again, it’s like, you think it’s completely unique at the same time that you think, oh, everyone goes through this. I would love to not show my daughter screams, I would love to hold the line. And then you have these moments where it’s like, oh, right, there’s a reason that parents put their kids in front of screens like it is really effective. And so it’s the same thing it’s like it’s another example of a moment where you kind of have your theoretical line and parenting techniques and worldview and then there’s the practical and it’s always a negotiation between those two.

And you know this Daniel Tiger thing is kind of feels the same way like on the one hand I guess you could see it as like oh it’s a concession to watching a show that is very popular and you know they make Daniel Tiger toys and she’s gonna want to Daniel Tiger toy and we you know now go down this slippery slope of you know, the Daniel Tiger industrial complex, but there’s also like to me, you know, what I find satisfying about this is now that I’m gaslighting her with Daniel Tiger that feels a little bit like creative-parenting, situational-parenting. Figuring something out that works for my daughter, like all those things that are also satisfying.

So it’s like this combination of like the thing that everyone does, which is what you do for a reason and like, this is about our unique relationship and my approach to parenting and we got to figure it out. And that’s kind of what I have found parenting to be in general, it’s like, you have to put your own, you obviously have to put your own spin on things, but there are systems and there are, there’s wisdom that exists for a reason and you should embrace it.

If you want to follow my work, you can find me on Twitter at Jody Avirgan, there’s also jodyavirgan.com—My latest show is a political history show with the network radio topia, it is called THIS DAY IN ESOTERIC POLITICAL HISTORY. We come out a few times a week so you can check that out. Thank you for listening to GOOD KIDS.

GOOD KIDS is a Lemonada Media Original. Supervising producer is Kryssy Pease. Associate producer is Alex McOwen and Kegan Zema is our engineer. The show is executive produced by Stephanie Wittels Wachs and Jessica Cordova Kramer. The music is by Dan Molad with additional music courtesy of APM music. Check us out on social at @LemonadaMedia, recommend us to a friend and rate and review us wherever you listen to podcast. If you want to submit a show idea, email us at hey@lemonadamedia.com. Until next week, stay good.

Updates from the show and Lemonada family that'll put a smile on your face.

How a Palm Reader Revealed My Family Secret

Get yourself a treat.
You deserve it.

Lemonada Media is an award-winning women-run podcast network that shares the unfiltered version of the human experience.